Skip to content
Want to know how to stay in France after TAPIF? Do you actually enjoy teaching? How about working more and earning an actual livable wage instead of making ends meet on the measly TAPIF salary? And have an employer that will sponsor your visa as a non-EU citizen?

Want to know how to stay in France after TAPIF? Do you actually enjoy teaching? How about working more and earning an actual livable wage instead of making ends meet on the measly TAPIF salary? And have an employer that will sponsor your visa as a non-EU citizen? Well mes ami.es, let me tell you about being a lecteur.trice d’anglais, which is basically like an assistant.e, but at the university level.

As a lecturer, you will have more responsibility and freedom with your classes. You will still probably focus on speaking with your students, but depending on the university you may get to teach other classes depending on your background. For example, this fall I taught a literary translation course to some second years! Your class sizes could range anywhere between 10-30 students, you’ll be alone with them the whole time, and you will be responsible for grading their work. Time spent in class could also range anywhere between 12-20 hours depending on whether or not you decide to take on extra classes, which means you will probably have one or two days off to plan spicy discussion questions, travel to a new city, or sleep in and catch up on Netflix because teaching can be mentally exhausting!  Another nice upgrade is the salary, instead of 800€ per month you get the SMIC (French minimum wage) which comes to about 1,200€ after taxes for 12 months, even in the summer when you aren’t teaching. The contract is one year and can be renewed for a second year, so that means more time in France which also means more baguettes and 2 years as resident than can count towards your eventual French citizenship!

One of the best things about teaching at a university is not having to worry about disciplining your students. When I worked in secondary schools as an assistante I had to worry about students talking out of turn, sneaking on their phones, and getting into all sorts of other teenage mischief. With young adult students, I mostly just have to remind them to put their phones away. Although I do miss teaching quirky tweens and teens, I really enjoy teaching older students because their level of English is usually higher and we can talk more in depth about a topic. When I taught lycéens, we worked on social media vocabulary, but recently with my undergrads we had a discussion about “cancel culture.” Sometimes having students that are only 3-6 years younger than me is intimidating, but ultimately I think it is an advantage because I can develop a friendly relationship with them that helps put them at ease when speaking in a foreign language. One of my students said she was inspired by me because I was young and teaching at a university while living in another country and speaking a second language. That inspiration is one of my favorite parts about teaching.

How to Get the Job

So, how can you land a magical position like this? I’ll be honest, it’s much harder to get a job as a lecteur/lectrice than it is to become a language assistant. There are less lecteur jobs than assistant jobs and they are highly competitive. After applying for more than ten positions I saw on the Société des Anglicistes de l’Enseignement Supérieur website I got some “no’s” and “try again next year’s.” Finally, I ended up having three interviews, two in-person ones for engineering schools in the suburbs of Paris, and one for a university in the South of France via Skype. I didn’t get accepted at the first two, but the third times the charm, I was offered a position in Perpignan, a small city close to the Spanish border that I had never even heard of before sending in my app. If you think you want to apply to be a lecteur/lectrice, have a French person read your CV, practice interviewing in English AND French, and consider smaller universities because la région parisienne is more competitive. Having a Master’s degree and teaching experience are also important factors universities have when hiring lecturers. I think one of the reasons I was hired for the third school was because I was more prepared for the interview and I did a better job of selling myself and my skills, so be confident and let your strengths shine! 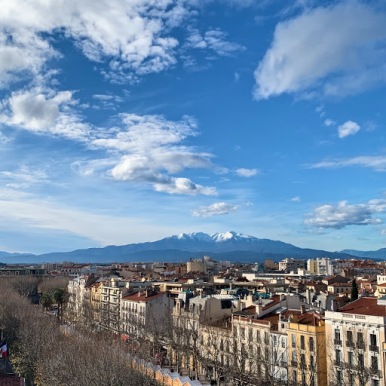 The Canigou – The Eastern Pyrénées 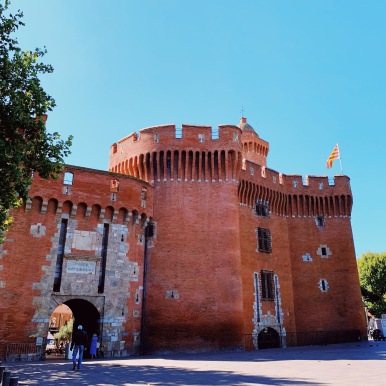 The Castillet – A Catalan Castle
*Disclaimer* Other lecteur/lectrice experiences could be different than mine! It really depends on your location, school, students, and faculty.

What are you thinking about doing after TAPIF? Have any questions about being a lecteur.trice d’anglais ? Let me know in the comments below!

Other helpful blogs and websites:

Join 269 other followers
Follow Baguettes and Bicyclettes on WordPress.com