Skip to content
When you think of French mountains, you probably think of the Alps, and so do I!  The thought of having a hygge moment in a cozy chalet while sharing a melty après ski dish of raclette with friends while gazing out the window to see the sunset glow on the massive snow capped peaks makes me almost miss winter!

When you think of French mountains, you probably think of the Alps, and so do I!  The thought of having a hygge moment in a cozy chalet while sharing a melty après ski dish of raclette with friends while gazing out the window to see the sunset glow on the massive snow capped peaks makes me almost miss winter! This past February I had skied in the alps with some of my expat friends, but I hadn’t yet been to the mountain range so close to my new home: the Pyrenees. Unfortunately, just before the French winter school holidays, a storm damaged the road RN116 and blocked access to the ski resorts. Thankfully, there were still ways to get there, but the detour time was 4 hours by bus, which is a 3 hour increase from the usual trajet. The long windy bus trip was not appealing especially since I had taken many buses during my Alps trip that made me feel nauseous.

Instead of going to Font Romeu, Les Angles, or Mont Louis, I decided to go somewhere a little bit, further, but accessible by train. Even though the trip would be a little bit longer, 6 hours by train seemed more reasonable than 4 hours in a bus. My new destination was now Ax 3 Domaines, a ski station west of Perpignan and just south of Toulouse . I had first learned about this resort from the instagram of another TAPIF assistant ‘s instagram photo of a snowy wonderland. Even though it can sometimes feel isolating living in another country, I’m glad there is a large community of expats in France I can connect with digitally.

My travel companion and I set out early in the morning and during one of our train layovers, we had breakfast in Toulouse, la ville rose. We wandered around until we found a cute little café that reminded us of Paris and stayed there until it was time to board our next train. I like researching and having a plan for what to do when I travel, but I don’t make a rigid schedule becuase I love leaving room to explore and be surprised.  After several hours playing games, talking, and falling asleep while admiring the changing landscape through the windows we arrived in the charming town of Ax-les-thermes. As you can see by the name, this town is named after its thermal hot springs used by Romans in ancient times, but used by tourists today. While my home of Perpignan is in the Pyrénées-Orientales, Ax-les-thèrmes is in the Ariège department, named after one of the tributaries of the Garonne river.

For lunch we wandered into the first restaurant we saw, La Casa Mauricio, a tapas bar. One great thing about living so close to the border with Spain is the mix of cultures, so there are a lot of tapas (like appetizers or small plates to share) places in Occitanie. Surprisingly there are quite a few vegetarian tapas. My favorites will have to include manchego cheese, escalivades, pan con tomate, and tortilla des patatas.

Since I had just been skiing and my travel buddy hadn’t skied since he was a kid, we decided our snow activity would be to try snowshoeing! This skiing alternative seemed perfect becuase we were only there for the weekend, it was less expensive than skiing, and we both love hiking. After lunch, we made our way to the télécabine to inquire about la raquette à neige. The woman at the ticket office told us it might be risky to go since there were strong winds earlier. We debated for a moment wether or not to risk it or to wait until tomorrow. Feeling brave, we decided to go for it since we had been waiting all day to try it and we wanted to leave tomorrow open for other activities. We rented our gear from the nearest shop and got our half-day tickets. The total price for the afternoon was around 16€ each! If we had gone skiing instead it would have been closer to 40€.

We had to take two gondolas up to the mountain where there was snow. It was an unusually warm February, so not many trails were open. It was sad to see the effects of climate change, but then again, the skiing industry can’t be that great for the environment. Think about all the manufacturing of the ski gear and the power it takes to run chairlifts all day. Despite some muddy patches, the view from the peak was absolutely breathtaking! I grew up in Costal Virginia, but having been born in Maine, I’m a mountain girl at heart.

It was weird to get used to the snowshoes at first, but after a few minutes we got the hang of it. We used a trail map to navigate our way around the ski trails. I was glad we decided not to ski becuase the lack of snow did not look fun. We snowshoed for about an hour and even went a little hors piste by following the tracks other hikers left earlier in the day. We wished we could have stayed longer, but we had to turn back because the last gondola down was at 4 PM.

After returning our shoes and poles, we walked around the town until we discovered an outdoor thermal foot bath people were using to soak their feet after a day of skiing. It might sound kind of gross, but it wasn’t that different from the ocean, a lake, or even a public pool. The water felt so good and it was the perfect way to relax after our snowy adventure. We eventually had to leave to catch our train to go to Foix, where our Air bnb was waiting for us.

Want to see more of my Pyrénées trip? Check out my vlog below!

Learn French: Click on the graphic below to pin this vocab sheet! 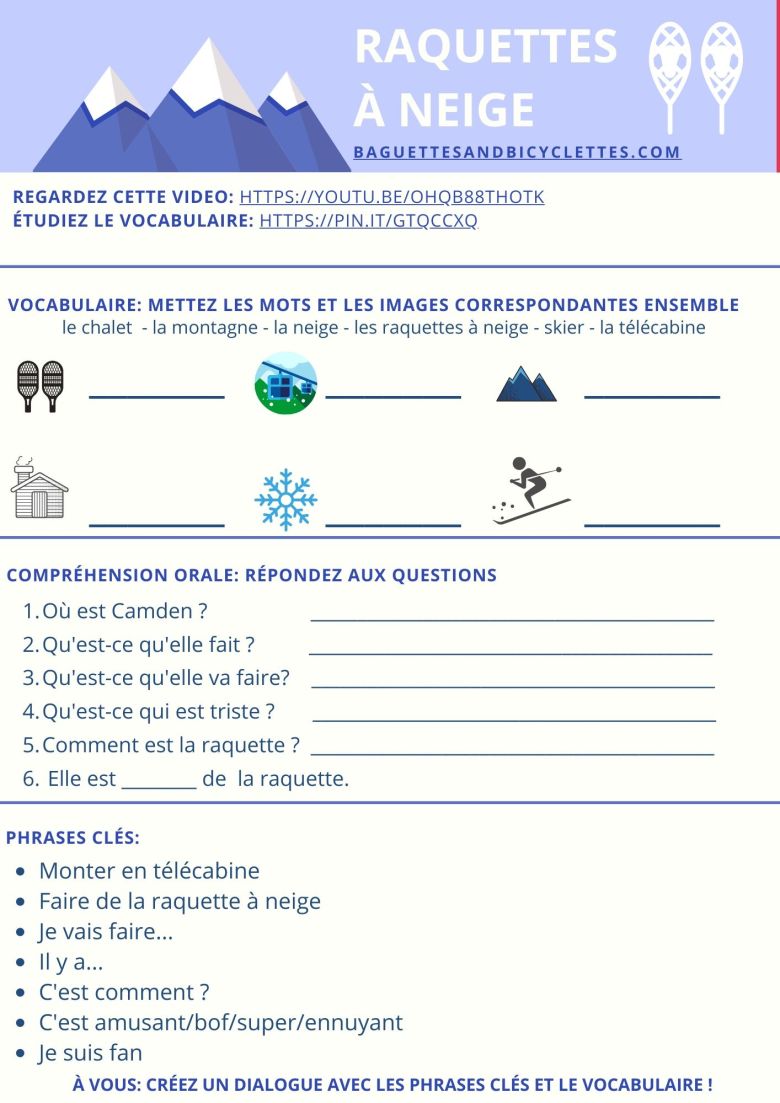 Thank you so much for reading! Wondering what we did the next day? Make sure to follow my blog to get notified about Part 2!