Skip to content
When I dreamed of living in France, I thought I would be living in a Parisian apartment with a balcony. I thought I would walk everywhere and eat baguettes everyday. Well, some of that is true! However, there was a lot of French culture shock I experienced when I first moved here.

When I dreamed of living in France, I thought I would be living in a Parisian apartment with a balcony. I thought I would walk everywhere and eat baguettes everyday. Well, some of that is true! However, there was a lot of French culture shock I experienced when I first moved here. Even though I studied French for almost a decade, I learned so much more after living here. 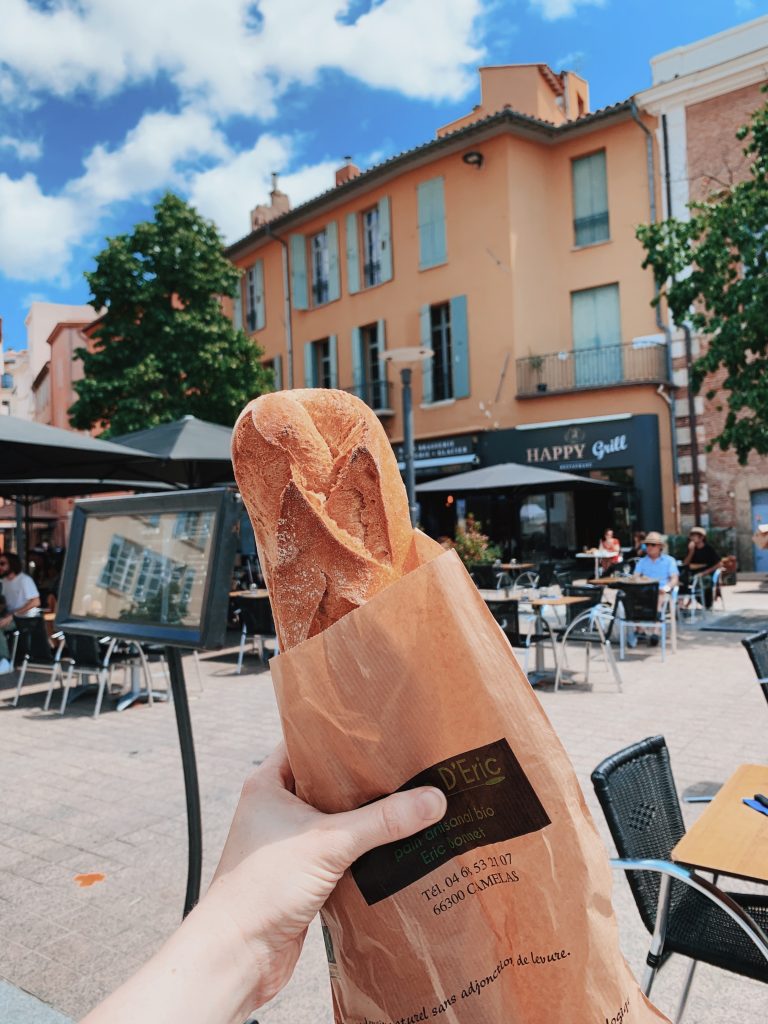 Just a little disclaimer: This is just my personal experience with French culture shock. Some of what I say might not apply to all of France/all French people!

Food is food, so how can going to the grocery store be that different? Even though France isn’t that different from the US, there is still a difference when it comes to culinary preferences and local products. In France the dairy section is a little bit larger than in the US. You’ll find dozens of local cheeses, all wonderfully smelly in their own way. Shredded cheese exists, but usually it’s just a form of Emmental (Swiss cheese). The yogurt and pudding like dessert sections are also expansive. In the US, we have shelves and shelves of ice cream. In France there’re shelves of creams, compotes, yogurts, pudding, mousse, and just a little bit of ice cream. 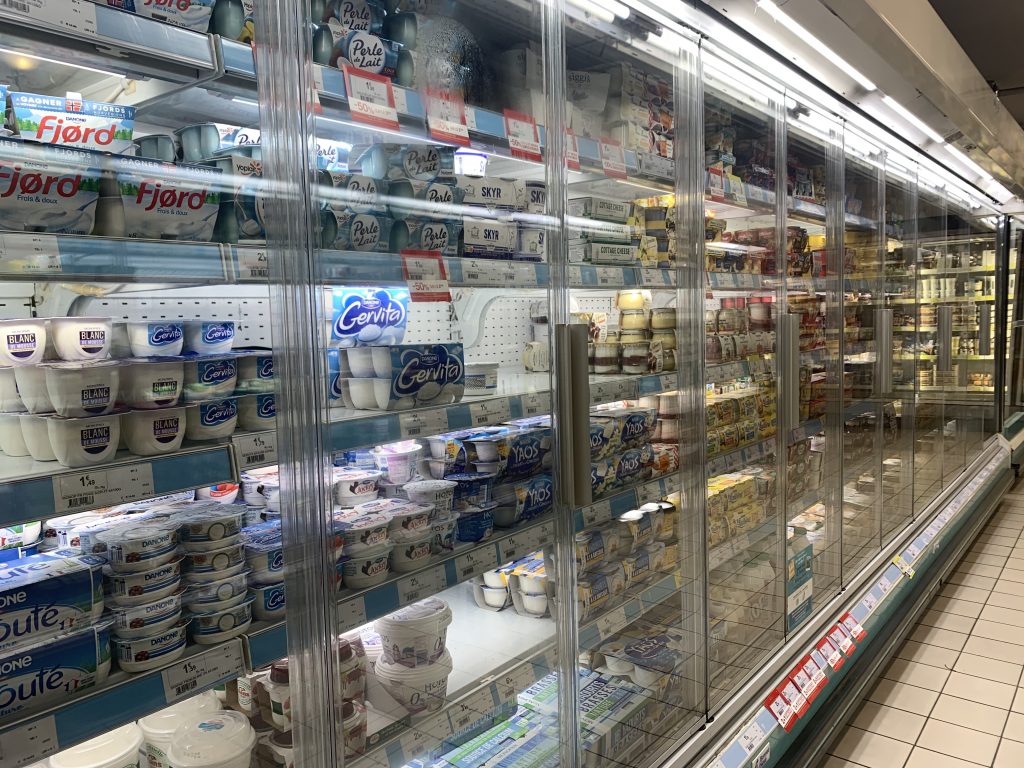 BYOB: Bring your own bag!

I know that in the US it’s more common now to bring your own reusable grocery bags. In some states like California, you have to pay for plastic or paper bags. In France you also need to bring your own grocery bags, but you can pay for a large plastic or paper bag for a couple of centimes if you forget yours at home. There are also these little caddies that mostly elderly folks use to transport their groceries. I low-key have always wanted one, but I just stick with bags so I can get a little arm workout when shopping. Another thing that surprised me when I first came here was that there are no baggers. You have to bag your groceries yourself, and you better do it quickly so you don’t hold up the line! 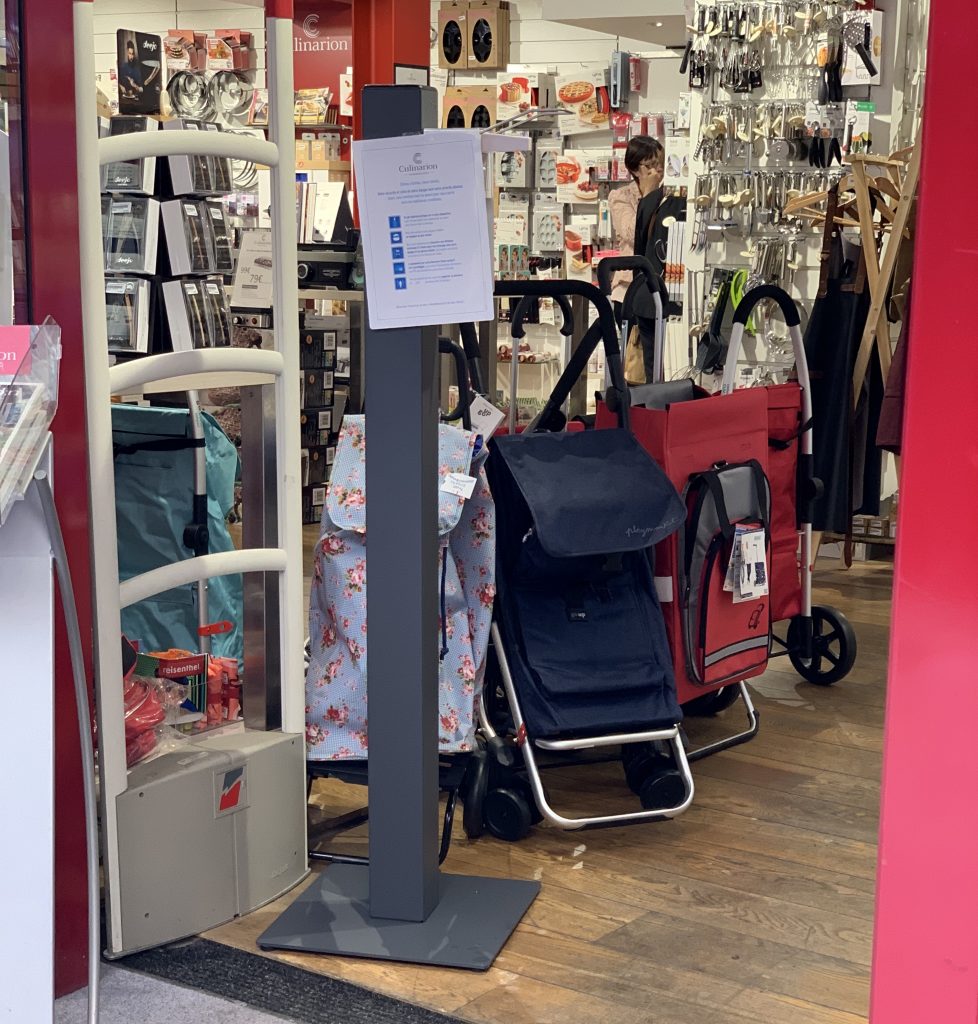 This French culture shock is something I was not expecting. For some reason, the organic produce in grocery stores is always wrapped in plastic! I want to eat as organic as I can, but I feel bad buying something with unnecessary plastic. Luckily organic produce can be found at farmers’ markets and in co-ops here. Being low-waste in France is possible, but requires planning and organization to be done effectively! 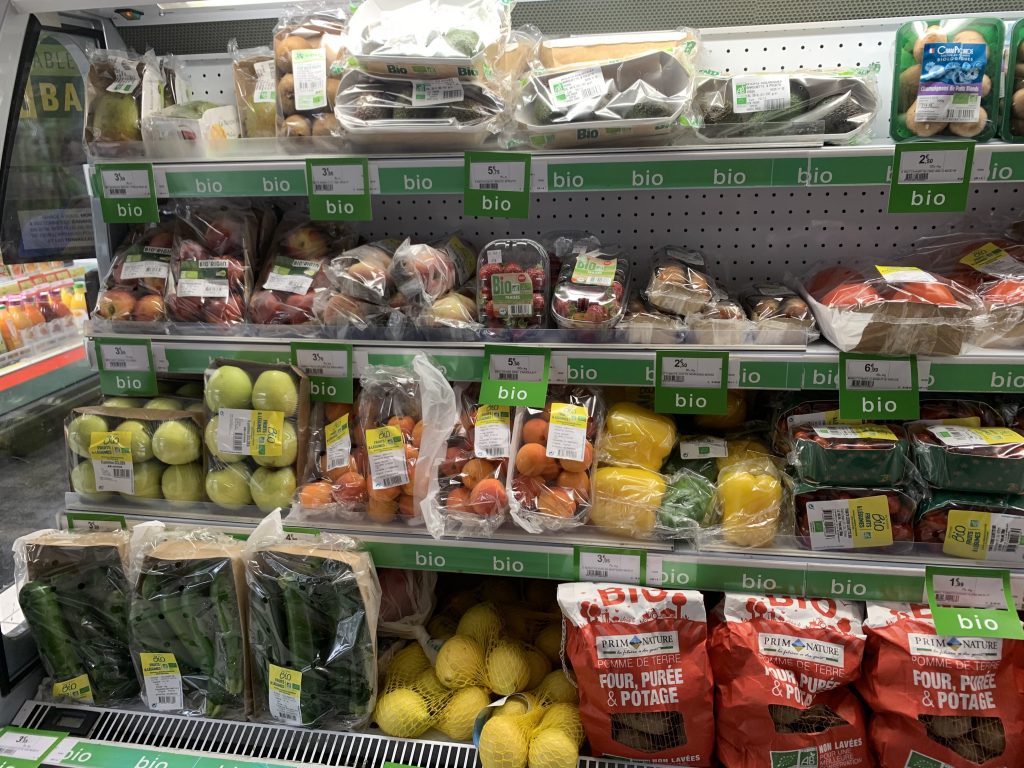 Going to the Doctor

So in France, when you go to the Doctor’s office, it’s actually in an office! I’m used to more sterile environments in clinics and hospitals in the US, so it was very strange to me to have my consultation at the Dr.’s desk. Another difference is how much cheaper medicine and health care is! The state reimburses most medical costs. For example I just got a cavity filled for 45€ and I will be fully reimbursed. Not everything is 100% covered though, so some choose to purchase a mutuelle, which is like private insurance that covers more costs. Medicine is also much cheaper! A little bit of money is taken out of each paycheck every month that goes towards healthcare and retirement, so it’s technically not “free healthcare.” However, it’s much more affordable than in the US in my experience.

In the US, I was used to eating 3 equally sized meals a day and rushing to eat during lunch hour. In France breakfast is usually a small piece of toast or pastry with coffee or juice. Lunch is also a time to relax and enjoy food! When I worked as an assistante d’anglais, I was surprised by the full course meal served in the cafeteria at my school. I struggle sometimes eating lunch in France at restaurants because it’s so much food! Even if you go to a bakery and order a sandwich to go, it’s on a whole baguette. 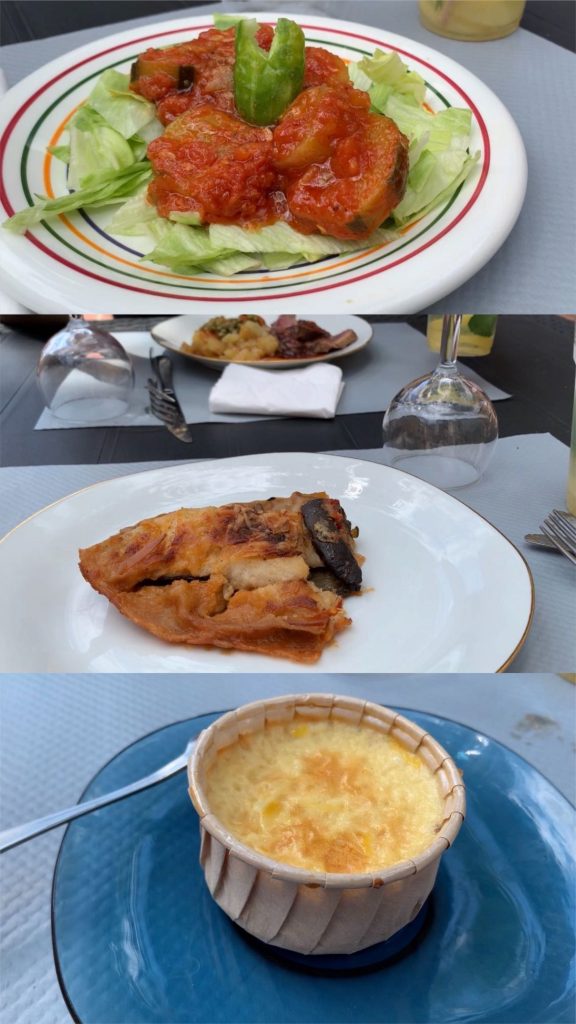 Dinner is also a larger meal, but people eat later. Some families do eat earlier, but most of the time dinner is around 8 PM. Most restaurants also don’t start taking reservations until 7 PM. After dinner you can treat yourself to dessert like crème brulée or a tarte au citron. Another dessert option is yogurt, which is strange as an American because I it is more of a breakfast or a snack food back home. Prefer something savory after your meal? In France you can also have a piece of cheese after your meal!

Before I moved to France I thought everyone walked or cycled everywhere and seldom drove cars. When I finally got here, I was surprised to learn that many people do indeed drive cars! In Belgium, the Netherlands, and some parts of Germany, bikes are the main way to get around. In addition to small cars, the French also drive a lot of motorcycles to weave their way through tiny streets and on big boulevards. 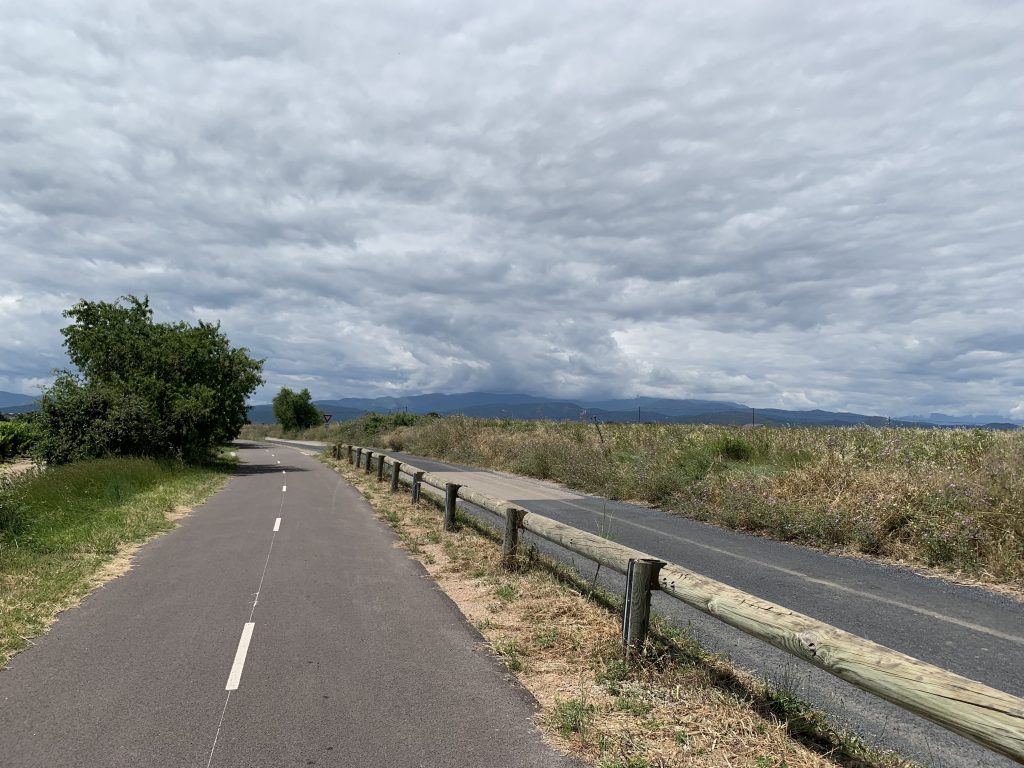 You don’t have to have a car to get around in France however. I have been car free for the past three years and have been able to navigate my way around France using my feet, by bike, public transportation, and trains. In the US, I never took public transportation because I lived in the suburbs and a car was more reliable than the busses there. In France, there isn’t a stigma about using public transportation like there is in the US. After living in France for a few years now, I’m more comfortable taking a train, tram, or bus, than driving a car!

Living in the US, I was always used to doing laundry with a washer and dryer. I only air dried my clothes when they were delicate or if I was on a family vacation in a cottage on the coast of Maine and there was no dryer. Most apartments in France are quite small and don’t always have room for a washer and dryer set up. A lot of my student friends in Paris didn’t even have space in their studios for one, so they would have to go to the laundromat to wash and dry their clothes. During my Master’s program last year I decided to start air drying my clothes to save a few extra euros; with washing and drying combined it cost about 4€ for one large load!

Even though I live in a larger apartment in the South of France now, there is still only room for a small washing machine. Now I have to plan doing laundry more in advance because air drying takes at least 24 hours. However, I don’t mind the wait because it’s more eco-friendly. Plus, I saved a little bit of money by buying just a washer and no dryer.

Money and Cost of Living

Even though the conversion rate for the Dollar to the Euro is not that great ( $1 = 0.89 € as of 2020), it still took me some time to get used to value of the new currency I was using. The bills are pretty straight forward to use because they increase in size as they increase in value. The coins however, do not follow that same pattern. It took a while before I could tell what was what without looking at the numbers on the coins. It was also a little bit strange getting used to 1 € and 2 € coins. In the US we have $1 coins, but they are not really used and are mostly for collectors. Even though they can sometimes make your wallet feel a little heavier, I’m a fan of the 1 € and 2 € coins, which are perfect for buying baguettes! 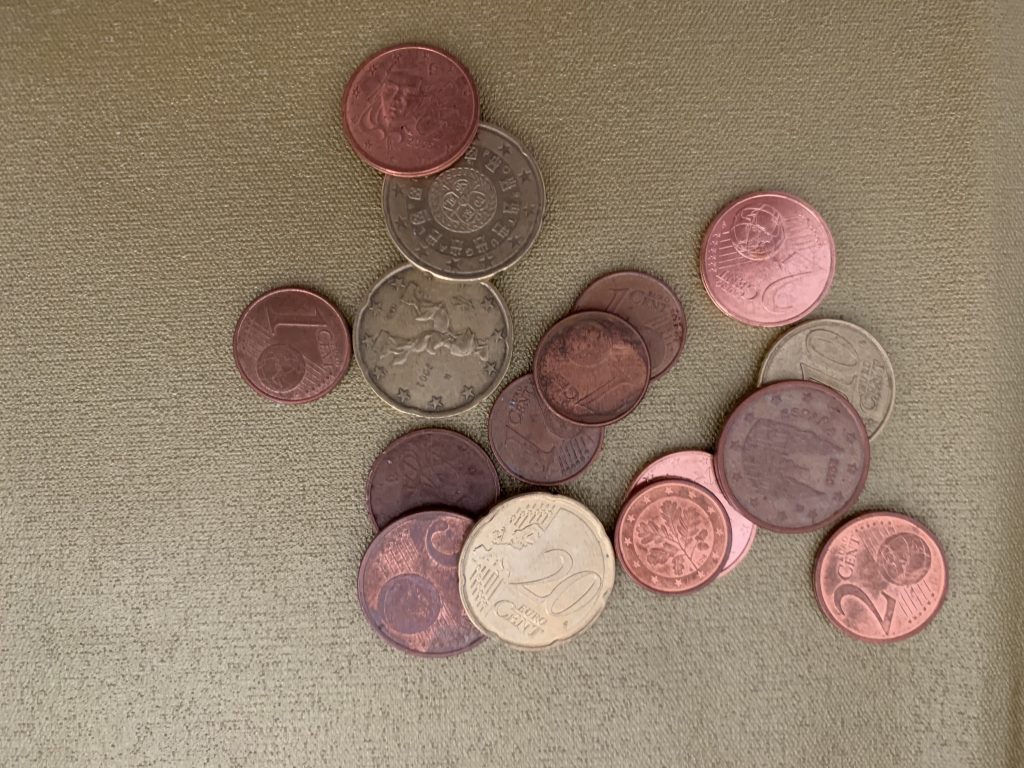 Personally, I find the cost of living here to be more affordable than in the US. I make less money here teaching than I would in the US, but I don’t have to worry about paying for a car or health insurance. As I mentioned earlier, some money does get taken out of my pay each month to go towards health care and retirement, but it’s worth it because the cost of living here isn’t as extreme. I am also able to get aid for my rent because I don’t make very much money. If was I was making minimum wage in the US, I would probably have to have a second job. I will also add that living in a smaller city in France is more affordable than living in a bigger city like Paris.

The last French culture shock on my list is the Metric System. To this day, I still don’t completely understand °C! The temperature on my weather app is still set to °F. I made my self a conversion chart last year that I put up on my wall in hopes I would learn Celsius. I know a few markers such as 0° which is freezing and 20° which is nice warm weather. The in-betweens are not as easy.

Kilograms and Kilometers are a little bit easier to understand because 1 kg = 2.2 lbs and 1 km = 0.62 miles. If I want a rough estimate I just multiply or divide by half. Baking, on the other hand, is a lot harder because most recipes here use grams. I’m used to measuring cups in the US, which are not common in France. A lot of the time I use tea cups to “guesstimate” measurements, which doesn’t always work out. I know I need to invest in a kitchen scale if I want to make recipes more accurately.

P.S. I also made a YouTube Video talking about my French culture shock experience: